BY THE NUMBERS: ARE WE GOING BACKWARDS, BABY? 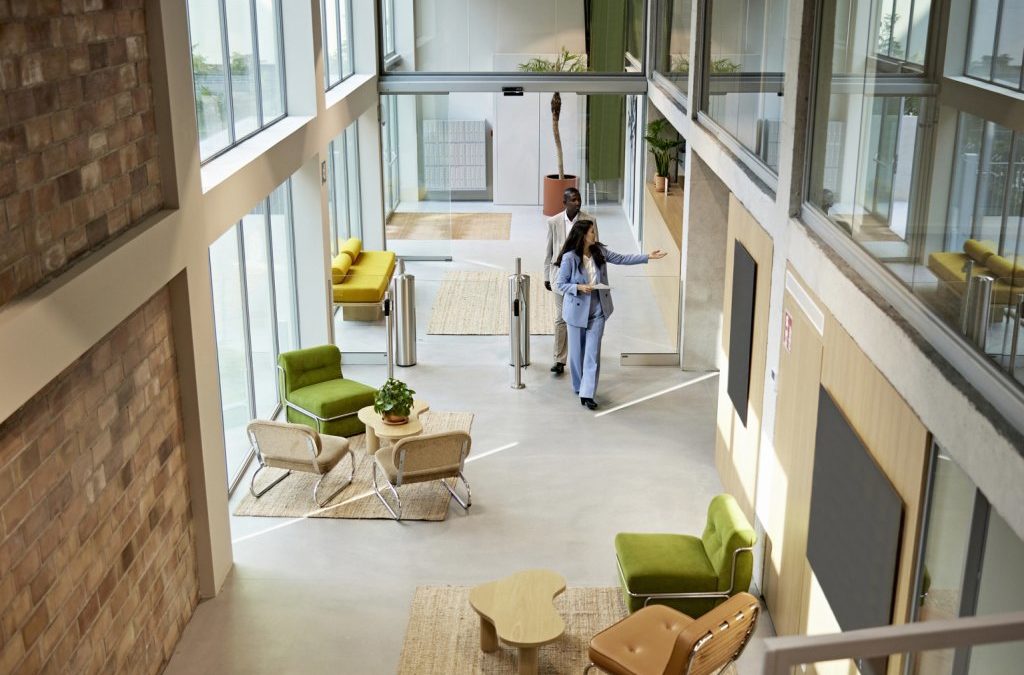 There’s no denying that the pandemic has changed the way we view work and how it fits into our lives. Broader pressures such as inflation, goods shortages and housing prices, combined with growing concerns about overall health, quality of life, compensation and work satisfaction, have driven countless workers to make more demands of their employers. Meanwhile, employers in virtually every industry have found themselves without much leverage, given the condition of the current employment market.

Indeed, a continuous and forced break from work awakened something in employees across the globe. People in every field have spent at least some time re-evaluating their career decisions and the trajectory of their lives. Many have embraced remote work, taken on new positions, relocated geographically or made complete career changes.

One noticeable trend that came out of this is a wave of early retirement, which reached two million people during the pandemic. It remained to be seen whether they return to work, or opt for a more flexible role, like as an independent contractor. The CEO of talent development company Disruption Advisors, Whitney Johnson, dubbed the movement “the Great Aspiration,” meaning workers are “aspiring to proactively make the life they want.”

These shifts in worker sentiment, combined with a tight labor market, have left most employers at a disadvantage. Many company leaders are realizing that employees have the upper hand now, so they’re going to have to do more to attract and retail skilled workers. They’ll have to do even more to maintain a diverse, contented staff.

When Women Leave, Is it Aspiration, or Desperation?

For many women, especially those who were forced to leave work to care for families or education, the “Great Aspiration” meant leaving the workforce for good. Some will never return, and Johnson expects this to result in “a blossoming of ‘cottage industries’ in the years to come” as individuals who don’t want to go back to traditional work start their own businesses.

It’s no surprise that these trends, and the dissatisfaction they represent, is more prevalent among women. After all, women bear the brunt of family duties and childcare even with a full-time job, which likely doesn’t pay as much as a man would earn in the same position.

More than half of those surveyed for Deloitte’s Women @ Work 2022 Global Outlook said that they are preparing to leave their employer within two years. Another 40 percent of women are actively seeking other employment because of burnout, mainly due to a misalignment of worker expectations and workplace experience. More on that later.

The commercial real estate industry is no exception; a summer 2022 study by CREW Network found that 29 percent of respondents said women left their companies voluntarily over the past two years because of COVID, up from 24 percent the prior year. What’s notable, though, is that the vast majority of those who have left (95 percent) have yet to come back. That’s disconcerting for an industry that’s spent years trying to not only recruit women, but to also retain and elevate them to positions of higher power.

In recognition of those profound changes, CBC created a program called What Moves Her that is designed to encourage and foster greater participation by women in the industry. You can find out more about the initiative on this link, as well as check out our most recent session focused on “The Current State of Women Investing in CRE,” featuring Beth Azor here.

Women have made great progress in the commercial real estate industry over the past decade; the idea that these advances may have been for naught is worrisome and warrants further examination. When asked about the reasons behind their decision to leave a position, more than half of women said cited a lack of advancement opportunity as the primary factor. That sentiment was echoed by half the women in middle management and non-managerial roles, who feel that their careers weren’t moving forward as fast as they’d like. The results were worse for women of color, and worse overall than the prior year. 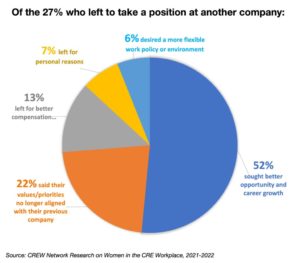 This complaint isn’t anything new and things seem to be getting worse. When CREW Network released its benchmark study in 2022, respondents listed the lack of a company mentor or sponsor as one of the top three barriers to their advancement in the industry. Just 56 percent of women in the industry had access to a mentor or sponsor in the two preceding years; that number drops to 21 percent for women of color.

As in the broader working world, stress is taking a toll on women in commercial real estate. In the Deloitte study, 53 percent of respondents said they are experiencing higher stress than a year ago, with nearly half saying they are burned out. A third have taken off work because of their mental health but only 43 percent said they could talk about their wellbeing at work. And again, burnout was more of an issue among women in middle management roles, as well as younger women (between 18 and 25), with 61 percent reporting concerning stress levels. Not surprisingly, the numbers are even higher among minorities.

Things are a little better on the compensation front. In CREW Network’s 2021 survey, 67 percent of participants received raises, even though just 30 percent of pollsters formally asked for one. As for this year, about three-quarters of those surveyed expect to see their compensation increase. On a refreshing note, there was little to no disparity in 2021 compensation and 2022 compensation projections across race, ethnicity or gender.

There’s no disputing that as an industry, commercial real estate lags in terms of diversity, equity and representation. It’s also undeniable that industry leaders have taken great measures over the past decade to catch up. As to how far those exertions have gotten them, and how their employees have received and responded to those efforts, is another question that must be examined further.

Come back next week for that analysis…