THE HOTTEST RENTAL MARKETS IN 2022

Since the start of 2022, there’s been a massive wave of new residents streaming into Florida. Remote work, warm weather, and looser COVID restrictions have played a significant role in the Sunshine State becoming the most sought-after region by renters this year. Miami specifically is considered the hottest rental market in the nation. In fact, demand for apartments in Southern Florida is stronger than ever, making it difficult for apartment hunters to find a place to call home. According to a report by RentCafe, this is due to high occupancy, low supply, and record-high lease renewal rates.

According to Yardi Matrix data, the number of apartments in Miami-Dade County grew by 1.8% between January and April. That’s the highest growth in new rentals among the top 20 cities in RentCafe’s ranking of The Most Competitive Rental Markets in 2022. However, this is still not enough to accommodate the increasing demand in Miami, especially considering three-quarters of the apartment residents decided to renew their leases during the first four months of 2022.

In addition to good weather and low taxes, South Florida also has a growing number of tech and finance businesses. It’s also important to note surging inflation and mortgage rates are placing a strain on those looking for homes. As a result, potential homeowners are passing up the chance to buy a home, adding more pressure on the apartment market. On top of all this, Miami is also experiencing an overheating for-sale housing market and an ultra-competitive rental landscape.

Metros such as Miami and Orlando are struggling to keep up with the demand from the influx of renters, despite significant increases in real estate development in both cities. Meanwhile, areas such as Harrisburg, PA, are even more prone to experience surging competition among renters due to the lack of new apartments. As indicated by RentCafe, rising home prices and mortgage rates keep potential homebuyers in the rental market, which is one reason we’re seeing record-high occupancy rates in apartment buildings nationwide. Competition intensifies as more renters opt to stay put amid a tight housing market. 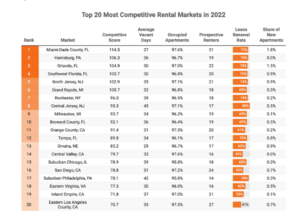 To get a sense of the demand for apartments in the U.S., RentCafe reports that apartments that became vacant were filled within 35 days on average in the first part of 2022, with 14 renters competing for one apartment to secure a lease. Additionally, 95.5% of rentals were occupied during the same time period, especially as almost two-thirds of renters opted to renew their leases rather than move into a new apartment or become homeowners. And with the number of newly opened apartments accounting for just 0.7% of the total housing supply, finding a new rental is becoming increasingly difficult to find.

Given the tight conditions, which are not expected to lessen anytime soon, experts predict the multifamily housing market will remain on solid footing. That should continue to drive investment interest in the sector as well.