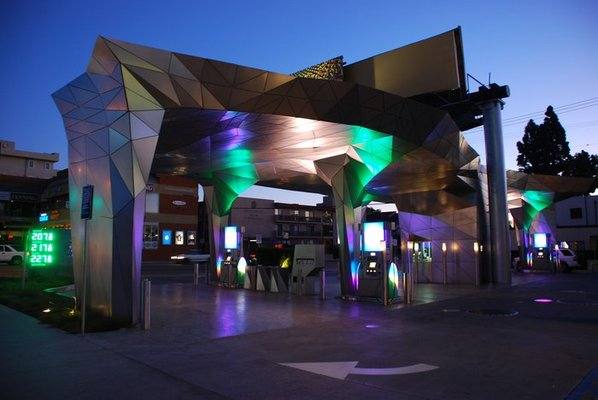 Growing up in a small town on the East Coast, the corner service station was a refuge where the neighborhood kids could congregate and chat over an ice-cold Coke. Our parents trusted the mechanics, the attendants filled their tanks, and everyone knew each other’s names. Fast forward to today, and small filling stations have all but disappeared, replaced by large chains, some of which boast cult-like followings. Service bays have been replaced by convenience stores, fast food chains, and even roadside stops that more closely resemble department stores.

Why foray into gas? According to Bill Gilmore with Coldwell Banker Commercial NRT, for operators, grocers, and chains, “gas station investments have become hot in recent years, bolstered by very high “pool margins,” the profit over the cost paid for the gas. Gilmore, who specializes in pad sites in Southern California, expects the trend to endure for the foreseeable future as convenience stores and grocers continue to vie for creative revenue sources from fuel.

Consequently, gas stations and convenience stores remain a popular choice among investors, with more than $2 billion in transaction volume each of the past 6 years, and nearly 4,000 properties changing hands. Additionally, cap rates remain favorable at an average of over 6.5% nationwide. Industry trends, however, are impacting the way in which investors, and developers, look at the future of this property type as hybrid and electric vehicles gain in popularity, and autonomous transportation enters the foray.  Nonetheless, consumers are driving more than ever, despite the high cost of petroleum. With $650 billion in total sales, nearly 40% of which is not at the pump, the landscape is rapidly changing for fueling centers.

Even with the rise in electric vehicles, and the fact that cars are more fuel-efficient than ever, gas stations remain ubiquitous across the US. Nonetheless, the count of gas-only stations has continued to decrease as consumers focus more on convenience and services. As such, fuel retailing has undergone a transformation, and those changes are shaping the way developers and investors view gas facilities. Driving the changes are non-fuel sales which are typically more profitable. Higher-end food choices, greater food selections, personal services such as hair salons and dry cleaning, car washes, and even EV charging stations are now regularly a part of new locations.

While the golden age of the fuel station is long gone, convenience stores with large pump banks are on the rise. Sites with 16+ fueling positions are not uncommon, nor is a 5,000 square foot store cobranded with the likes of Subway and Starbucks, or simply offering better food selections. It is not a surprise then that gas station convenience stores are taking a bite out of fast food sales, with 56% of Americans making at least one purchase per month. Moreover, gas purchase may be a secondary purchase, or not a purchase at all. As such, development sites have become larger to accommodate for more parking and larger stores.

WAWA is at the forefront of the gas station transition, with a cult-like following drawn by their food and beverage choices. The 54-year-old WAWA chain has grown to become one of the top 20 U.S. convenience store chains, despite having only an East Coast presence with approximately 850 stores. While still providing consumer favorite specialty sandwiches and Tasty Kakes, the company has also started rolling out Mediterranean bowls, kale and grain salads, “clean” products, and a variety of healthy snacks as consumer tastes continue to evolve. Investors have recognized the strength of the change, as stores often trade below a 5% cap rate. WAWA is actively seeking sites in the East, and planning on an additional 60 locations in 2019, with Florida leading the way. Corporate leadership estimates that WAWA could double its store count by 2030. BP, 7-11, and Shell are all experimenting with their own projects, ranging from craft coffee partnerships to uncommon cobranding and more modern stores.

Gallon of Milk and Gallons of Gas

Grocers and discounters have also become a part of the fueling landscape, with Costco, Sam’s Club, Albertsons/Safeway and Kroeger actively playing a role. Typically, locations are on-site pad locations with the intention of capturing gas customers from shopping and offering fuel discounts to devoted customers in the form of club memberships and loyalty programs. The consumer also comes into the store from the pump, as they would from a traditional convenience store, providing the grocer with additional revenue possibilities.

Grocers remain keen on the connectivity of onsite fuel as opposed to off-site convenience stores. For some, that Publix in Florida began its foray into offsite markets in 2001, but sold them off 12 years later, exiting the fuel business. Conversely, Kroeger while made news last year when they sold off their convenience stores to the UK-based EG Group, they remain active in the gas business with over 700 on-site locations and are continuing to expand. In Southern California, Kroeger-owned Ralphs began accelerating its entry into fuel in 2012, when a supermarket gas station was an uncommon site in Los Angeles.  Now, several chains there have followed suit.

Convenience store/gas station combos will continue to adapt as the race to match changing consumer lifestyle choices continues. Future trends include solar powered sites, sit-down restaurants, online shopping pick-up facilities, larger fueling points for both electric and hydrogen vehicles. To better lure loyal, younger customers, stores are also turning to car connected apps such as GasBuddy, enabling the customer to pay via the app, as well as get coupons from nearby retailers. As other retailers close, this segment appears to be adapting to stay relevant with today’s consumer.